Be the first to review this product
$30.00
In stock
SKU
FPELF1oz
Add to Wish List Add to Compare
ElectroLife is a living compound containing over 85 Dynamic minerals combined with 16 trace metabolic enzymes, 18 trace amino-acids, electrolytes, dissolved oxygen & hydrogen. This nutritional supplement supports zest for life by increased oxygen levels, free-radical removal and nutrient absorption. It escorts a film of water into the air sacks of the lungs thereby helping the lungs to completely exhale. It generates and delivers oxygen in the body as needed. It has the ability to do all of this, through a humic/fulvic delivery system that can deliver it into each cell.
Skip to the end of the images gallery 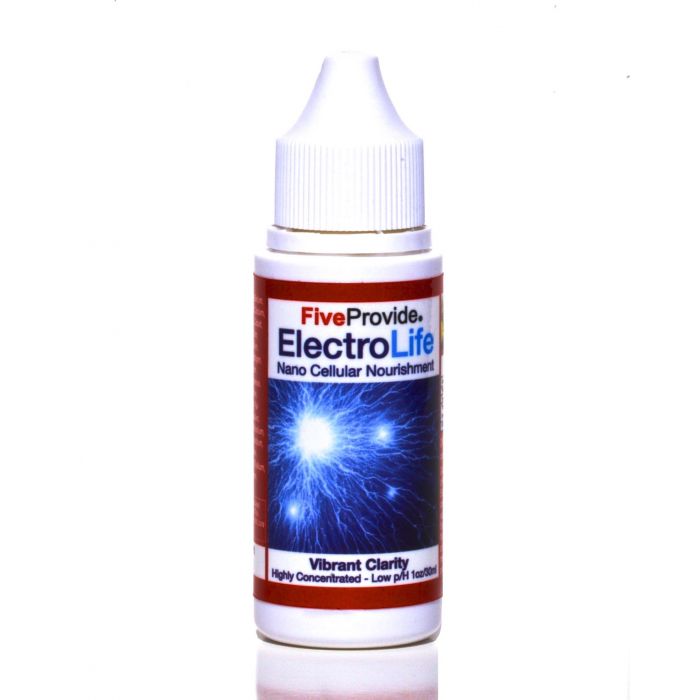 Skip to the beginning of the images gallery
Details


This nutritional supplement supports zest for life by increased oxygen levels, free-radical removal and nutrient absorption. It escorts a film of water into the air sacks of the lungs thereby helping the lungs to completely exhale. It generates and delivers oxygen in the body as needed. It has the ability to do all of this, through a humic/fulvic delivery system that can deliver it into each cell.

When mixed with water or juice it weakens the bonds of the water molecule and releases oxygen and hydrogen directly into the body and keeps doing this in a chain reaction for up to 3 days after each serving, providing superior levels of natural detoxification and elimination. This dramatically boosts the energy and concentration levels, as well as strengthening the immune system, killing bacteria, virus, fungi and parasites without harming beneficial microorganisms (probiotics).

ElectroLife enhances the bioavailability of other supplements as much as 3-5 times taken in the same 24 hour period. Its oxygen is negatively charged and no free radicals are produced; rather, the negatively charged oxygen will bond with free radicals and convert them to safe, stabilized oxygen molecules. It is also a di-base formula, which means it will normalize pH in the body, for many this means alkalizing our usually overly acidic bodies.

Dosage Ranges
Along with the Morning Flush, you may use 12 drops 2 times daily in any liquid.

CAUTION: The metabolic enzymes in ElectroLife provide a great service to the body, but they can also digest cloth or fabric. If the liquid drops on your skin, wash it off before rubbing it on clothing. Being a concentrate, it should always be placed in liquid before taking it.

Why Plastic bottle: This product is the only liquid product we have in plastic bottles for safety reasons. Glass dropper bottles can spill and leak. ElectroLife does not react to the plastic bottle.

Thunderheads rolling in full of energy begin to drop rain just before the first bolts of lightning begin to flash from the leading edge of the dark foamy clouds. The raindrops are descending as miniature capacitors as they hold and carry some of the electricity of the fully charged cloud.

We have discovered that upon striking most soils, a measurable charge is dispersed by the droplets for up to a nine foot radius. This discharge amounts to an information transfer, which affects plants, seeds and the water soluble crystals which can grow on all of the earth’s elements.

These crystals are able to retain this discharge of information. And, where water may have a short-term memory, crystals can have a long-term memory. Plants in turn draw up this form of water-soluble crystals into the plant stem under pressure and the influence of Fulvic acid where millions of bits of information are fed into these crystals.

These crystal minerals in turn become ultra-miniature capacitors* able to hold and release information through electrical discharge. It is one thing to just have minerals another to have fully informed minerals as nature intended.

We have found a way to obtain such fully informed minerals. Approximately 85% of them are perfect twelve-sided crystals. The remaining have as many as sixty-four sides. If we liken these crystals to a basketball, an ionic mineral is like a car and a colloidal is like a bus next to them. We have discovered nature’s secret to reducing their size. It occurs much like the quantum-leap within an atom. We can trigger the mineral to transform to a smaller size over and over without changing its information or its appearance.

In conclusion, our minerals are in the right form, in the correct size, and they are fully informed. They are truly unique and in a formula that releases a treasure trove of hydrogen and oxygen at a cellular level. Included in the ElectroLife formula is not only all the correct minerals we may need but the amino acids and metabolic enzymes for body functions.

Add to this the fact that this formula has easy access through all cell membranes and you achieve almost magical performance.

It's been said in many tradition that there's only one disease known to mankind, although it has a thousand names. It's called cancer, arthritis, chronic fatigue, premature aging, and many, many other names. It's the disease of too many toxins staying in the body and too few nutrients reaching the cells. ElectroLife assists with  both of these issues. . It supplies the body's need for oxygenation, without which all-important cellular detoxification cannot take place, and the body's need for vital trace nutrients- ElectroLife has over 120. The ElectroLife formulation delivers cell-building hydrogen, enzymes and electrolytes on the deepest cellular level with absolute maximum bio-availability.

1. ElectroLife is 3.5% body friendly sulfur. Also provides oxygen, hydrogen, metabolic enzymes, vitamins, minerals and amino acids. It can support detoxification of the bowels and all body cells in time.

2. ElectroLife is derived from only the purest natural organic sources, including the clean southern seas and sea vegetation between New Zealand and Antarctica, fossilized plant from virgin earth and mineral springs.

3. ElectroLife uses a unique process developed in the 1950's. When mixed with water or juice, it literally weakens the bonds of the water molecule, separating the oxygen from the hydrogen releasing oxygen and hydrogen directly into the body - and keeps doing this in a chain reaction using the body's own moisture, for up to 3 days after each serving. This means that superior levels of cellular detoxification are supported by ElectroLifeTM.

4. The result of the oxygen, hydrogen and nutrient-delivering capacities of ElectroLife is a dramatic boost in energy and concentration levels, as well as an ongoing support for strengthening of the immune system.

6. ElectroLife greatly enhances the bio-availability of any other supplements (sometimes even as much as 3-5 times) taken in the same 24 hour period. OXY CHANNEL also enhances the absorption of pharmaceutical medications. There are no substances that are incompatible with ElectroLife.

7. ElectroLife oxygen release is negatively charged, and time released in chain reaction, and so no free radicals are produced. In fact, the negatively-charged oxygen molecules released by ElectroLife will bond with any free radicals (which are often created by many other so-called 'oxygen products') that are present in the body - and convert them to safe, stabilized oxygen molecules.

8. ElectroLife is a di-base formula, which means that it will normalize pH levels in the body. If a body is highly acid (which most are) the ElectroLife will alkalize it, bringing it toward an acid-alkaline balance.

These nutrients are in nano-size. (34 from fossilized plant taken from virgin earth and 44 from the clean Southern Seas surrounding New Zealand, unrefined and still containing their natural sources.) The dilutions of these essential trace elements are designed to provide more electron and deuteron activity of the constructive type to optimally allow the mind to take control of body functions induced by the electrical currents moving through the fully conductive nervous system.

*These minerals are estimated to be 100,000 times smaller than Angstrom and very alive with information)

These 60 minerals were found to be in soil samples of America in the 1850’s.